Creepy Crawlies of all sizes are so much fun for a little boy.  For my little Bug's 2nd Birthday, a BUG theme was a must.

Many ideas came from Pinterest:  http://pinterest.com/sschaedel/bugs-birthday-theme/.  What an amazing resource to have, LOVE IT!

Colour Scheme:  Greens mainly but some blue and yellow also 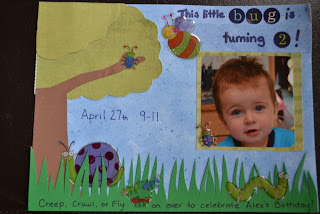 This was the first invitation I did.  It's scrapbooked with the intention of getting photograph copies made but didnt end up having time to get out of town to have thatdone.  So my second invite I made (and forgot to take a picture I suppose) was a green leaf cut from construction paper.  I added some bug stickers and wrote the same as this.
"This little BUG is turning 2!  Creep, Crawl, or Fly on over to celebrate Alex's Birthday!" 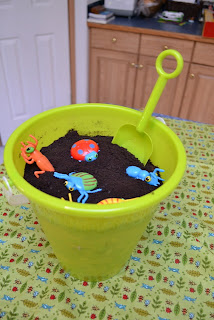 The CAKE!  In a clean new pail, I assembled a chocolate trifle -- so easy!  Layers of chocolate cake, and a mixture of cool whip & chocolate pudding.  Then a layer of oreo cookie crumbs on top for dirt.  Served with a shovel and a gummy worm for each serving.  It was a hit! 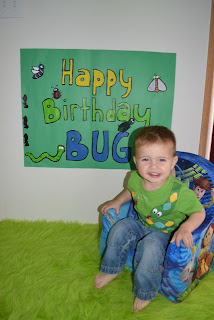 From the ceiling I hung a cluster of green, blue, and yellow balloons.
In the spot where he would be opening presents (as shown in pic) I hung a sign I made from bristol board and a grassy green rug I purchased from Walmart awhile ago.
Another decoration I did was to hang bugs cut from craft foam from the lights over our island.  They wiggled & dangled in the air adding a fun buggy atmosphere.
A yard of fabric with bugs was used as a table cloth. 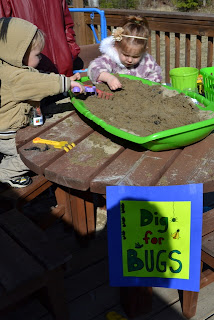 Digging For Bugs was a huge attraction for the kids.  I filled a green snow sled (could also use a shallow rubbermail bin) with sand and LOTS of rubber bugs bought from Halloween clearance and the Dollar Store.  Kids used rakes and filled up jars.  The jars were left from Epicure spices with their lids all spray painted black (baby food jars another option!)  I attached a sticky label saying "Bug Jar".  The kids also put in a small green construction paper leaf to feed their bugs.  Their was also colouring pages for the kids.  Due to the age of the kids, I mainly just had free play going on. 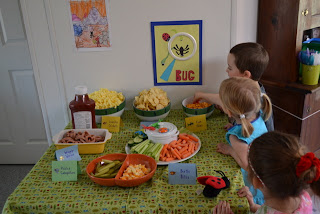 LOOTBAGS:
(sadly no picture!)
a ziploc baggie with their jar of bugs, bug stickers, a small ziploc of gummy worms, and a rubber ball with a bug inside it.  Plus a thank you card as well.


Enjoy your bug theme, there are so many options and variations you can do!